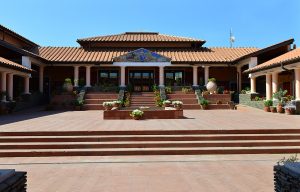 Scientific and research centre (Domvs Scientiarvm) in Viminacium was invented as a multi-purpose object. During last year, it was visited by elite scientists who participated at the International Conference on Cultural Heritage („Archaeological Heritage – its Role in Education, Presentation and Popularization of Science “). In 2011, the IX International UNESCO summit named „Modern art and reconciliation“ took place there, attended by numerous presidents and ministers from south-eastern Europe.
The Viminacium Scientific-Research Center (Domvs Scientiarvm) has been designed as a multipurpose facility. Besides the fact that scientists from Serbia and from abroad will use its studies, libraries and atria for researches, workshops with students, summer schools and organization of congresses and topical meetings, it will serve for accommodating tourists who show an increasing interest for visiting Viminacium.
The facility is designated in the shape of a Roman villa rustica. It has two levels: the upper one, containing working and accommodating premises, and the lower one with the museum, storerooms and conference halls.
The upper level consists of a set of atria, around which are: the kitchen with dining room, the library with the reading room, a presentation hall, workshops, laboratories, studies and rooms for accommodation of professional teams as well as for visitors, just as a replica of Roman thermae, with the capacity of a smaller spa-centre.
The lower level represents a partially isolated zone with increased security and strict climatic control of museum collections and storerooms. The subterranean hall decorated with a mosaic and Late Antique frescoes discovered during archaeological excavations of the Viminacium cemeteries are also exposed.
Viminacium is located in an exceptional area near the Danube River, enabling the direct and accessible tourist transportation by water.
Environment in which is Domvs projected is abundant with shaped scenery and architectural entities which will provide additional protection of objects from too much heating in the summer and in winter from cooling constructions. This pleasant ambient will particularly serve for the visitors of Viminacium during their short break from the city crowds and the fieldwork at the archaeological site.

Economic sustainability of the Archaeological Park and the Domus

The Archaeological Park was created as a self-sustainable project, supported by the resourcing Ministries while organizing important events. Income basically comes from individual visitors and selling souvenirs, as well as from catering within the park. On the other hand, the focus is on organizing congresses and thematic gatherings, spa weekends and attractive short-term holidays, offering Roman life-style as a special experience. Such a specific approach to tourist offer brings incomes which should sponsor further archaeological research and development of the archaeological park.
Domvs Scientiarvm represents the highlight of our archaeological tourism, with its unique atmosphere of ancient Rome, in which a visitor could be whatever he/she likes – an archaeologist, a legionary or an emperor. Such an offer includes Roman costumes, tasting Roman food prepared according to ancient recipes and staying in an object built according to a typical Roman model.
Ever since 2006, Viminacium possesses a ponton port on the Danube, enabling access to big river-cruisers.
Additional activities, gathering several thousands of people just in a single day, could include re-enactments of gladiators’ fights, concerts, theatre performances and operas, with high potentials for a huge income.