Remains of Roman Singidunum occupy the central part of modern Belgrade. Legionary fortress, civil settlement as well as necropolises lie bellow the very centre of Belgrade. In the civil settlement area, mainly rescue excavations have yielded some results regarding city architecture, but not to the extent to understand completely the urban layout, possible position of forum, and other urban elements. Two streets oriented in the NW-SE direction show that the establishment of II-IV century settlement was influenced by the orientation of the castra. Most of the excavated structures show the same orientation. Inhabited area was roughly 35-40 ha, stretching on both sides of the central reef on Belgrade hill. Necropolis dated in the period of II-III century occupied area along the road to Viminacium in the line of 1.6 km. Although there are some opinions that civil settlement of Singidunum got its municipal status in the period of Hadrian, its position besides the legionary camp put some strong doubts regarding this date. On the NW riverside, by the confluence, on few occasions buildings dated in II and III centuries were discovered. Besides others, speleaum dedicated to Mithra. According to numerous military equipment finds, Lower Town area has strong military context, perhaps as NW canabae. In the late antiquity, this area was protected by one of the side walls running from NW tower along the slope towards the river. 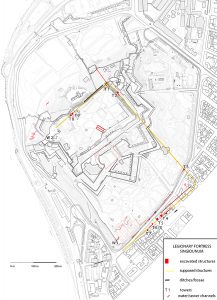 Remains of legionary fortress in Singidunum lie just above the confluence of Sava and Danube rivers, on higher and strategically ideal ground. On the NW and SW sides steep slopes present ideal protection, while visual communication stretches on the sides towards neighbouring forts of Taurunum and Octavum. During the last 70 Years, research of legionary fortress in Singidunum gave various results. Although it was excavated on different occasions during such a long time, only some parts of its layout have been determined. The main problem of proper research of legionary fortress in Singidunum lies in the fact that large parts were destroyed by medieval and latter fortifications. Large parts of praetentura around via principalis, as well as Principia were completely destroyed by the bastion fortifications in XVII and XVIII centuries.

According to various archaeological excavations one can define the precise length of the lateral side, but not the precise width of fortress. Positions of NW, NE and SE rampart walls have been determined so far, but position of SW wall remains doubtful. With the length of 568 meters (19 actus) Singidunum fortress is similar to fortresses erected during the second half of the II century (Albing, Ločica). According to the find of last barrack block in the most south-western part of retentura, we can say that fortification width was more than 400 meters. Since that erection of bastion fortifications has destroyed most of SW side, and since there is huge difference in ground levels, where steep slope (30 meters height difference) hits the river shore (Sava River), it is difficult even to presume the position of SW wall. Find of wall oriented in NS direction refers to much later period when barracks were not in function. Gates on NW and SE side have been excavated with various results. NW gate (porta praetoria) had two inner towers and narrow passage of just 3 meters. On the opposite side porta decumana with inner towers had much larger passage of 12 meters (28.3 m when outer sides of the towers are measured). Only systematic research of fortress interior was conducted on the SW side, where four rows of legionary barracks were found. The walls were made of rough stone connected with lime mortar. The barracks were divided into contuberniae with verandah on the street side. Remains of supporting pillar stones, and channels were found in the space between verandah and streets.

Idea that there are at least two fortification phases was raised according to finds of protruding and inner towers on different parts of NE wall and northern angle. Also the position of NW ditch just one meter in front of NW wall does not correlate to protruding north corner tower which is 7 meters long. Similar situation was recorded on the SE side where one protruding and 3 inner towers were found. Difference in rampart wall widths point also to the assumption that at least two phases in fortification elements existed. Absolute dating is possible just through the indirect indications, since no archaeological context points to the date of the first or second phase of the construction.

More than in fortification elements, we can observe different phases of construction within the inner structures in the SE part of retentura. Legionary barracks created in the first half of the II century (first phase) were long buildings with one longitudinal wall oriented in direction NW-SE with side walls on the both sides. NE side is wider than south-eastern, which dividing rooms into contuberniae of different length. In front of them remains of veranda with pillar bases were excavated. Streets with channels between the barracks consisted of crushed stones and lime mortar. Second phase was determined by rearrangement of the barracks in the end of the third century (second phase). Heating installations were introduced within contuberniae. New structures (third phase of construction), built above the streets between the barracks, relate to the period after mid IV century. To the same period belongs large horrea in the NW part (praetentura) of the fortress. Its orientation doesn’t follow general NW-SE orientation of the walls in the vicinity. 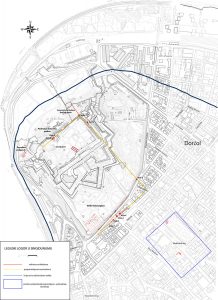